Italy IDAHOBIT 2020. Will you pray with us for the overcoming of homophobia, transphobia and all types of discrimination? 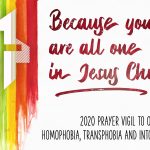 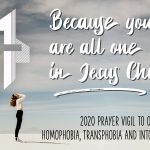 Even this year, as in the past years since 2007, we will be organising a series of prayer vigils and worship services in Christian communities in different cities to remember the victims of homophobia and transphobia. These prayer meetings are to be held on the occasion of the International Day against Homophobia, Biphobia, Intersexism and Transphobia (IDAHOBIT) observed annually on 17th May.

The organisation of this year’s prayer meetings began with the choice of the biblical verse for the IDAHOBIT prayer vigils set to take place in many Italian and European cities. Through a highly participated online poll, the verse chosen for this year’s prayer vigils was that of Galatians 3:28: “There is neither Jew nor Greek, there is neither slave nor free person, there is not male and female; for you are all one in Christ Jesus.” However, when the COVID 19 pandemic reached us, all religious ceremonies were suspended and the situation grew worse, there was a growing realization that this year, prayer vigils on the occasion of IDAHOBIT could not be held in churches.

Given the present circumstances, what can be done?

This is the same question the youths in Florence (Italy) asked themselves way back in 2007 when they thought of what could be done in response to the deafening silence with which their Christian communities reacted to the many episodes of homophobia and transphobia reported on the news. Their answer was that of ‘inventing something new’ and this was also applied to the present circumstances. As a result, the idea came about of tapping the full potential of the internet to organise online prayer meetings.

Many churches belonging to various denominations, associations, groups of Christian LGBT persons and their parents and other realities concerned with integration and inclusion situated in various parts of Italy are currently working on several online prayer initiatives to mark IDAHOBIT. The aim of these vigils and meetings is that of asking ourselves what it means for us today to live the message of the chosen verse (Galatians 3:28) with which Paul urges us to put aside stereotypes and divisions.

The first event is scheduled on WEDNESDAY 13th May at 1800 hours with a radio programme dedicated to ‘Vigils for overcoming homophobia. From veto to reception’ with the participation of Christian LGBT youths belonging to the Ali d’Aquila group as well as the Waldensian pastor Peter Ciaccio from Palermo. The radio programme entitled ‘The Diary of Gionata’ will be aired on Radio Stonata.

In the evening, an online biblical meeting with the participation of the Baptist pastor Elisabeth Green on the verse “There is neither Jew nor Greek here; there is neither slave nor free; there is neither male nor female; because you are all one in Christ Jesus“(Galatians 3, 28) will take place at 2050 hours. This online meeting will unite all the prayer vigils of this year and will provide a reflection on the message of strength, courage and hope that can be found in Paul’s words and that can be applied to the present times marked by fear and other difficulties. This meeting is organised by the association “La Tenda di Gionata“.

On THURSDAY 14th May at 1900 hours, the Organising Committee of the vigils against homophobia and transphobia in Palermo will be organising a prayer meeting live on Facebook that will bring together more than twenty different entities located in Palermo ranging from groups of homosexual believers, churches of different denominations, parishes and ecclesial movements to civil rights movements, schools and many others which have decided to join in this initiative, under the patronage of the Municipality.

In the evening, the Christian LGBT groups ‘Emmanuele’ in Padua and ‘La Parola’ in Vicenza will hold an online prayer vigil against homophobia led by Don Dario Vivian. The vigil starts at 9 pm and can be followed on the Facebook page of Vicenza Pride by clicking this link: https://www.facebook.com/VicenzaPride/

On SUNDAY 17th May, the International day against Homophobia, Biphobia and Transphobia will be marked by several online moments of prayer and reflection on this theme to which everyone can participate by computer, mobile phone and (in some cases) via landline.

At 0930 hours, morning prayer (lauds) organised by the Christian LGBT youth branch of Il Guado Group in Milan and the Bethel Group in Genoa. During the morning prayer, the participants will remember and pray for the victims of the homophobia and transphobia (To participate click here)

At 1630 hours, the Christian communities in Piacenza, Parma and Reggio Emilia with groups of Christian LGBT persons and their parents will hold an online prayer vigil for the overcoming of the violence related to homophobia and all types of discrimination. (For more information click here)

At 1830 hours, a similar online prayer vigil will be held by the Christian LGBT group “Progetto Ruah” in Trieste with the participation of members of some evangelical and Catholic churches situated in the city (For more information click here)

At 2030 hours, an ‘Evening against Homophobia and Transphobia’ organised by the Waldensian Evangelical Church of Turin in collaboration with the Christian LGBT group ‘Il Pozzo di Sicar’ in Turin and the LGBT choir ‘Qoro’. The evening will include a biblical meditation, testimonials, study reports and songs to reflect on the experiences of LGBT asylum seekers fleeing countries where they are persecuted for their sexual orientation (To participate click here).

This day of prayer and reflection will end with night prayer (Compline) at 2230 hours organised by Christian LGBT youths where participants will pray for the overcoming of homophobia and transphobia (To participate click here).

On THURSDAY 28th May, the Christian LGBT group ‘In Cammino’ in Bologna will be organising a prayer vigil against all types of discrimination at 2100 hours.

We also remind you of the liturgical outlines and guide on the occasion of the International Day against Homophobia and Transphobia drawn up by the ‘Faith and Homosexuality’ Commission of the Baptist, Methodist and Waldensian churches in Italy. The document can be downloaded here. Other initiatives will be promoted in the coming days while videos, testimonials and infographics will be disseminated on social networks to raise more awareness of this important theme and most pressing issue.

To join or to find out more about the above-mentioned initiatives, you can visit the following websites www.gionata.org or https://inveglia.wordpress.com/ or contact us on progettogionata@gmail.com

So, will you pray with us this year? See you there!