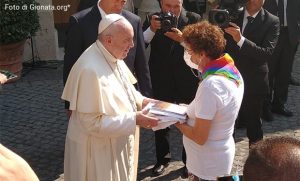 “Since 2015, groups of religious parents with LGBTQ sons and daughters have been emerging across Italy with the intent of breaking the silence and coming out of the shadows to tell the Church that all are children of God and as such should be welcomed and loved”.

This is what Innocenzo Pontillo, president of the Italian LGBTQ association La Tenda di Gionata (Jonathan’s Tent), had to say as he described the meeting with Pope Francis during the Papal Audience yesterday.

La Tenda di Gionata is one such group, “an association (editor’s note: formed also of LGBTQ Christians and other pastoral workers who accompany them) founded at the request of Don David Esposito, a Catholic priest who sought to create a safe space where this reality could be addressed by favouring the welcoming, formation and information of LGBT Christians, their families and pastoral workers, as well as promoting dialogue on these matters with other Christian realities”.

After journeying together for a few years, the volunteers of the association noticed how their experiences – and in particular the book titled Lucky Parents: the testimonies of Christian parents struggling with the discovery of homosexual children published by the same association and containing stories of Catholic families coming to terms with the reality of LGBTQ children – constitute “a useful resource for those who want to eradicate prejudices and barriers and help build bridges. We wanted to familiarize Pope Francis with our journey and sought his affirmation of our quest for what is true and good”.

Thus, the idea came about of requesting admission to today’s general audience, to meet Pope Francis and present him with this booklet.

The meeting took place on Wednesday 16th September. Mara Grassi (vice president of La Tenda di Gionata and Catholic mother of a homosexual son) describes that moment, “The Pope spoke about contemplation, about the need to discover the love and light of God in all creation, all people and all things.

As I handed him our booklet, I explained to him how lucky we are because we have been compelled to change the way we have always seen our children and notice in them the beauty and love of God. We want to journey with and create a bridge with the Church so that it too can change her way of looking at our children by no longer excluding them but fully welcoming them.”