by Melissa Feito, newwaysministry.org (USA), May 9, 2020
.
An Italian organization for families with LGBTQ members has released a free publication for parents with LGBTQ children. Titled Fortunate Parents: the testimonies of Christian parents struggling with the discovery of homosexual children, the book includes the stories of various Catholic families coming to terms with, and eventually accepting their LGBTQ kids. 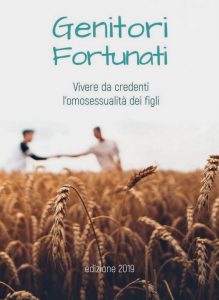 The book was published by “La Tenda di Gionata (Jonathan’s Tent),” a project of “Progetto Gionata (Project Jonathan),” an Italian LGBTQ organization that aims to reconcile “homosexuality and faith.” “La Tenda” was started by Father David Esposito, a Catholic priest who found that many families did not know how to accompany their LGBTQ children on their journeys, sometimes causing harm due to lack of understanding or experience. Although only 31% of Italians attend church regularly, about 83% of Italians identify as Catholic. The deep cultural impact of Catholicism resonates in many Italian families regardless of religious practice.

In the book’s foreword, Father Gian Luca Carrega of the Diocese of Torino writes that the publication is “a denunciation of the ecclesial isolation that [LGBTQ children] have experienced […] which makes us wonder deeply about the meaning of our being Church.”

In an accompanying video (which can be viewed with English subtitles), several Italian couples are interviewed about their experience with discovering their adult children are LGBTQ and their journey to reconciliation. Though all parents have grown to accept their children, not all had an easy path.

One couple, Mara and Agostino, describe how their active role in their parish made it hard for them to accept their gay son at first. Mara describes how her son did not actually come out to her, rather she forced the news out of him because she was afraid he might be gay. That method caused “a lot of distance” between them, and it ended with her son leaving home. Eventually, Mara says she discovered that there is “another God, where faith is not about obedience to some rules.” She adds that her family then started “a very beautiful journey of sharing, of openness.”

Claudio and Grazia had a different kind of experience. Grazia says that as a “good Christian” she first reassured her son all was well. But she soon entered into a deep spiritual crisis, asking why God would do this to her and what He wanted of her. “I don’t understand,” she says “I was good. I was part of the church and groups […] I was perfect! What happened? Did I do something wrong, my Lord?” At first, her relationship with her son was strained, and they could not look each other in the eye. But after a period of growing acceptance, their relationship grew to be “more beautiful than before: intense, stronger, and more sensitive.”

When Laura her husband Alberto discovered their daughter was a lesbian, Alberto said it was hard for the two of them to imagine a “different future” for her. But when her daughter came out to them, Laura says she “loved her even more. I was even more proud, because of her journey, her maturity, both human maturity and maturity of faith for having the courage to tell us.”

Michela and Corrado say that their son’s coming out was not an issue for their family, but for their church. “The church needs to take responsibility for all these children,” says Corrado “We can’t let them go away.” Corrado says the first thing a parent should say to a child coming out is “thank you. Thank you for telling us this deep fact about you, thank you for trusting us. Thank you because you’ve told us the most precious part of your heart.”

Michela adds, “And say I love you.”